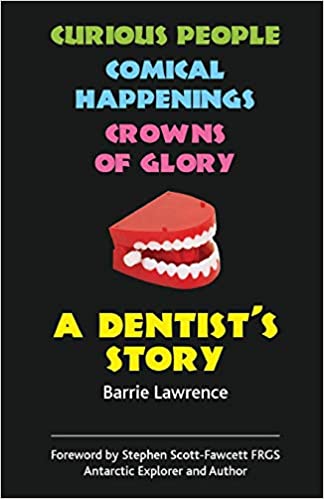 After-dinner speaker Barrie Lawrence has been making people laugh – really laugh – for years. Now it’s your turn to hear his unbelievably funny, sometimes poignant stories from dental school, surgery and life. How did a pet frog lead to a successful career of seven dental surgeries and a bookshop? And of course, he was a student during those years known as the ‘Swinging Sixties!’ But something else happened at the London Hospital – something that was even more important than training as a dentist!

As a boy, Barrie developed a passion for natural history, and spent much of his leisure time pulling leeches out of a nearby mill-pond, and catching mice with his hands and carrying them home in his pockets. And there was that frog!

Training to be a dentist in Whitechapel in the ‘60s, Barrie missed one of the Kray murders by around 20 minutes. At the hospital, he learnt to fill teeth on a phantom head, before being let loose on live patients. Barrie describes his ‘first filling’ and his ‘first injection’, as well as his first formal dinner (where a senior lecturer was ‘debagged’) and his exploits in the University Wine and Food Society. But there was also romance as he courted his University sweetheart.

He came across the God Squad, could not really understand them, but liked them as people. He dismissed their ‘gospel’, but found he could not get away from it. He wrestled with it, and then one day, something happened, and he wondered, ‘Have I joined the God Squad too?’

One senior lecturer likened Barrie qualifying as a dentist to ‘letting a monkey loose with a pistol’. So the ‘monkey’ went to Dorset and worked at a practice in the delightful hill-top town of Shaftesbury, and he describes some of his more unusual patients there. He married, had two daughters, moved back to his native Norfolk, where he and his wife had two more daughters.

He bought a run-down practice in Norwich, that financial backers would not back. They called it a ‘dead duck’. But the single surgery practice became so busy that after one year, he added a second surgery, and the following year, another. Before long there were seven surgeries, including two at his country practice where he eventually settled. And a bookshop. Again, there were unusual happenings – patients who shared the same set of false teeth, the man who vomited his false teeth from the top of a double-decker bus in the centre of Norwich, and the burglar who Barrie caught at the practice one night.

Barrie makes people laugh with his after-dinner talks, but he is also a regular speaker in local churches. In addition to this, he is a husband, father, grandfather, blogger, traveller – and writes books.

You’ll laugh, you’ll cry, and most important of all, you will be inspired.