Dead Funny! – my patient, the undertaker.

By BarriePublished On: December 17, 2018Comments Off on Dead Funny! – my patient, the undertaker. 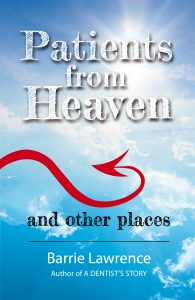 DEAD FUNNY (Taken from ‘PATIENTS FROM HEAVEN – and Other Places’.

“Dead funny, that,” said Bert. “Dead funny is what I say.” And his face expressed sadness, grief, and melancholia. Funny that.

I have always told people that I liked my work and loved my patients. I think I love people – I hope I do, though there are probably a sizeable number who would dispute that, protesting,

But a new patient always meant a new person – a new personality with different interests, stories to tell, and so on. I liked to listen, and have been told that I could have made a fortune by simply getting on and drilling teeth. But life is not about money, though we all need a certain amount of it. And those who think it is all about money can never get enough, and then find that despite it seeming to promise so much, it never delivers. So they have to get more of it, and find themselves on a treadmill leading to further disappointment and frustration. Mr. Albert Walpole – what refreshing new stories, opinions and so on would he bring?

The surgery was cleaned up from the previous patient. Work surfaces were sterilised, instruments taken off to the autoclave, computer records written up and such like.

“Mr. Lawrence. There’s a big black hearse in the middle of the car park,” said my nurse, looking out of the window. “I don’t think other people will be able to get into the car park while it’s there. And there’s someone just sitting in it. It must be the driver.”

We waited for our new patient to arrive, while I made some remark about hearses parked outside the practice sending the wrong message to people walking past.

“Bleep, bleep!” The computer gave me an audible alert that a patient had arrived, and a little match-stick man appeared in the top left hand corner of the screen. Looking further down the screen, a tick had appeared beside ‘Mr. Albert Walpole’.

I liked to greet each patient personally when they arrived, if at all possible. The first thing we would do was to have a scanning X-ray taken by the nurse, and then, while I was taking small X-rays and making conversation with the patient in the surgery, the nurse would develop the one she had taken so that I could get a comprehensive view of all that was present.

I went through to the waiting room to introduce myself to Mr. Walpole and welcome him to the practice. On one side of the room was a mother with two children, and a balding man with a slightly swollen face. On the other side sat the saddest-looking man I had ever seen. He was grey-haired, with a long pale face and a long black coat. For those who can remember the television series Steptoe and Son, he looked like a tall version of Steptoe senior. The other people in the room were silent, and staring across at Mr. Walpole, who in turn was staring through the wall opposite him. There was the air of death in the place.

“Mr. Walpole?” I said with a smile, and held out my hand. He slowly stood to his feet, stared at me with zero expression, and shook my hand limply.

He did not say a word, so I continued.

“It’s really good to meet you, Mr. Walpole. My nurse here, Karen, is going to take a scanning X-ray of you before I actually examine your teeth. She’ll show you the way to the X-ray room.”

Without a word, and without the hint of a smile, Mr. Walpole followed Karen out of the room. The receptionist looked my way and raised her eyebrows in a way that said “Different”, and handed me the questionnaire that Mr. Walpole had filled in for us.

A few minutes later, Karen brought Mr. Walpole through to the surgery, and I took his coat from him. As expected, this revealed a dark grey suit, which had clearly seen much better days.

“I see you live and work in Reedborough,” I said. “That’s what? about ten miles? Take you long getting here?”

“Not long enough where the dentist is concerned,” he replied in a monotone. “I like the traffic really slow when going to a dentist. Dead slow.” There was no smile. He didn’t look at me but just stared ahead.

“So you’re an undertaker, I see,” I said, hoping to engage Mr. Walpole in conversation in order to develop something of a relationship.

“Been one for years,” the monotone continued, adding, “Dead boring.”

“Very good. Like your humour,” I popped in. “How long have you been in Reedborough?”

“Most of my life,” he said without altering his gaze, which appeared to be focused somewhere beyond the surgery wall he was facing. “Live on the outskirts, and work in the High Street. Dead centre of town.”

This was obviously his style, though I expect he spared the bereaved his unusual humour. I was not going to have a relaxed and friendly conversation here, so I examined his teeth and discussed a treatment plan. He needed a few fillings and an extraction. We booked him in for the extraction the following week.

“That hearse is back, Mr. Lawrence,” said Karen, “And he’s just sitting out there again.”

I went to the window, and Bert (apparently that was how he was known to his… um… did he have any friends?) was sitting there, his profile clearly visible and unmistakably Bert.

“What’s he doing?” said Karen, for Bert was now trying to get into an inside pocket without getting out of the hearse.

He found what he was looking for, and unscrewed the cap. Then the hip flask was raised to his mouth, and he was swigging away – once, twice, three-times. And then he sat, motionless. Dead still? After around five minutes he emerged from the hearse and made his way to the practice entrance. A match-stick man appeared on the computer screen and Mr. Walpole’s name had a tick beside it.

I fetched him through, and fumes of Scotch whisky invaded the surgery.

“How are you today, Mr. Walpole,” I enquired as I adjusted the head-rest to make him comfortable.

“Scared,” he grunted. “Dead scared. But a bit better than I was.”

So I proceeded to numb the tooth, and removed it. He bit on some gauze to prevent bleeding, and made an appointment for the fillings.

“The hearse has just arrived in the car park,” said Karen, and we went to the window and watched from behind the blind. Fumble, fumble and out came the hip flask. Swig, swig, swig and back it went again. Five minutes to let it take effect, and into the waiting room.

“I’m used to all things cold,” said the man of death. “Mother-in-law lives with us, and she says she’s cold. I tell her that I’ll be warming her up soon. Very hot and very soon. She’s in her nineties, you see. Hot!” I thought for a second that he was going to smile – but no. No expression at all, really.

So I carried out the fillings, and he subsequently came and saw our dental hygienist for two sessions.

He said he would come regularly. He made an appointment for six months. But he did not turn up. Funny that. Dead funny!