By BarriePublished On: September 15, 2018Comments Off on Westminster! 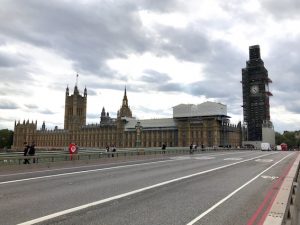 Have you ever been to London? If you live in the UK, almost certainly. Have you been to Westminster? Well, I thought I had not – though I had a surprise last week!

I trained for 5 years in London, when I was a young man. I had spent my childhood mainly in Norfolk, and on leaving London, went to work in rural Dorset, and eventually returned to Norfolk in 1973. London? – no thank you!

My old dental school amalgamated (excuse the pun) with another, and then a medical school from another hospital was incorporated, and also Queen Mary’s College (QMC). A few weeks ago a letter arrived inviting all alumni of the various colleges within the umbrella of QMC to a reception at Westminster. And we decided to go for it.

We’re not young, and London seemed like something of a challenge. We went by rail, and had lunch at St. Katherine’s Dock. It was memorable, as Wendy has never had a steak so tough she could not eat it. We were offered a replacement, but the service was slow, and she had enjoyed her starter – and the chips that went with the steak.

We walked along the south bank, occasionally stopping for a lemonade or coffee, and taking photographs of the Tower of London, Tower Bridge, etc. 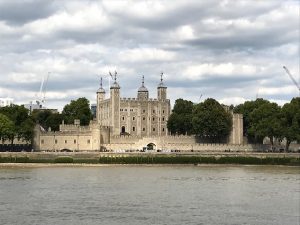 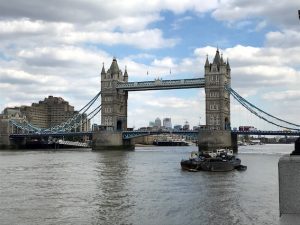 We found ourselves at Westminster early evening. We did a tour, and it was at that point that I realised I had been there before. “Only sovereigns lie in state in the great hall here,” said our guide. “Except for three exceptions”. And I recalled queuing for around 3 hours to pay my respects to Sir Winston Churchill when he lay in state back in 1965. Just 53 years ago. 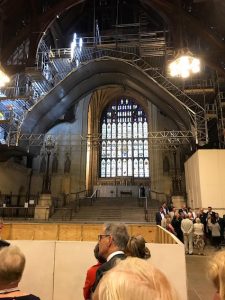 The majesty of the buildings, and the history that had played out there, created an atmosphere that is unforgettable. The wine flowed, the canapés were served throughout, and the speeches were engaging. We stood and gazed out across the Thames to St. Thomas Hospital and the London Eye. 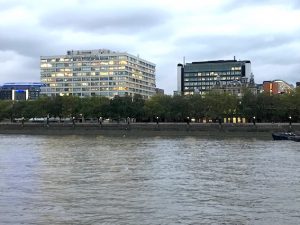 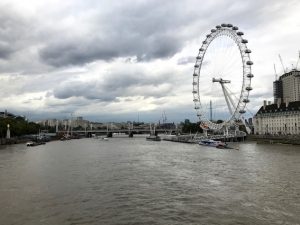 Paul was at the reception. He was a year under mine, and I hardly knew him then. He had chosen an academic career, became Dean of Dental Studies at the Royal London, and I knew him from his photos in every dental magazine. He came over to me and complimented me on my books. A gracious man. The wife of a retired ambassador chatted with Wendy for some time, and took a photograph of us. 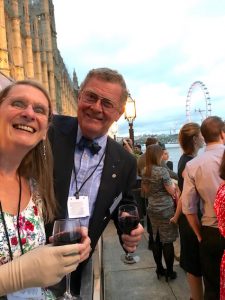 We returned by rail, and arrived home at nearly midnight. Or just after. The next morning we were off to Nottingham for two days of meetings, but are now home for a while. Well, for a short time.

Westminster – the centre of government for centuries, and full of history. I keep thinking about it. I also think of another capital city that I visited just once, many years ago. Jerusalem. Another city with a history of government. And not just a history, but a future. I read in my Bible that the day will come when Jesus returns to this earth, and his place of government will be Jerusalem. I wonder what that will be like! We get glimpses in scripture, but the reality will surpass the written account. I look forward to that day.

In the meantime, I get on with life in my rural home, occasionally thinking back to those long past days when I bicycled round our capital city, spent five years in Whitechapel (missing one of Ronnie Kray’s murders by 20 minutes), and queued for 3 hours at Westminster to demonstrate respect for one of our greatest leaders, Sir Winston Churchill.